While extensive work has been performed with regard micro air vehicles (MAVs), the additional constraints faced by a microrobot tasked with aerial and terrestrial locomotion has yet to be fully addressed.  Our team has developed a Morphing Micro Air and Land Vehicle (MMALV) based on passive mechanics of cockroach and bat locomotion. Presently, three prototypes have been constructed based on studies of the mechanics of thin, undercambered, bat-like wings and abstracted cockroach ground locomotion mechanisms.  The current robot is capable of flying and walking, and successfully transitions between locomotion modalities. An insect-like wing retraction mechanism has also been designed.  To our knowledge, this vehicle was the first hand held robot capable of powered flight, landing, and crawling in a single uninterrupted sequence.  Future efforts will be centred on neural control system to achieve aerial and terrestrial autonomy. 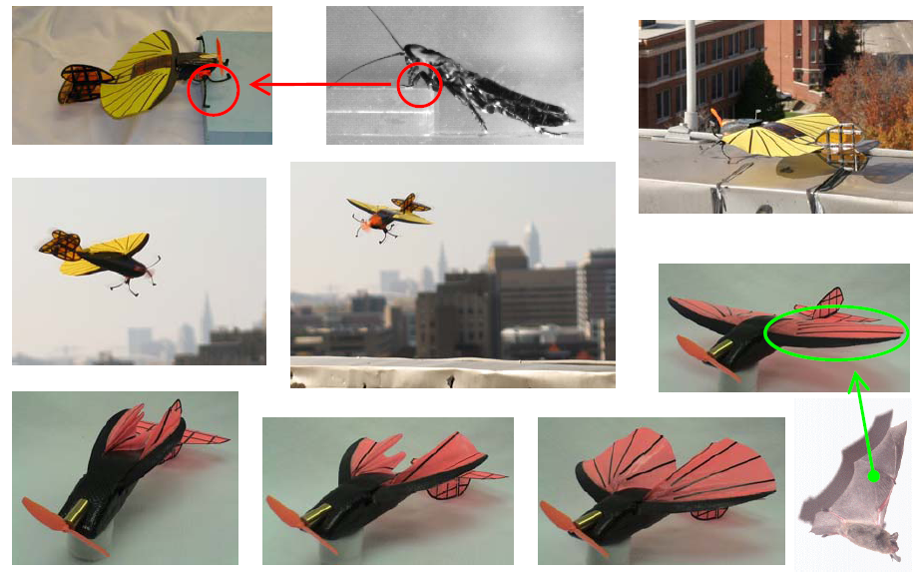 Morphing Micro Air Land Vehicle (MMALV) Constituent technologies (cockroach-inspired ground robot and flexible wing MAV) are depicted at the top, current generations of the multi-mode mobile and wing-folding prototypes are shown in the middle with the animal inspiration depicted. The center figure shows snapshots of a roof-top surveillance mission sequence. A summary of the proposed work under this program is presented to the right