Parkinson's disease (PD) is a neurodegenerate disorder that affects 1 in 500 people worldwide. Parkinson's disease occurs as a result of a death of nerve cell endings in the deep brain - specifically the subthalmic nucleus (STN) and the globus pallidus pars interna (GPi). A reduction in dopamine neurotranmitters occurs as a result which then lead to the movement disorders present from PD. Motor symptoms of PD include rigidity, tremor and bradykinesia. Rigidity occurs when limbs stiffen up unnecessarily, tremor is the involuntary shaking of the limbs and bradykinesia is unintentional slow movement. There is no cure for PD at the moment but there are two ongoing treatments. Current treatments to reduce the severtiy of symptoms include oral medication and deep brain stimulation (DBS). Oral medication, such as levadopa, replenish this drop in dopamine to restore normal movement. DBS, on the other hand, stimulates the deep brain to stop the errorneous signals transmitted to the motor cortex that creates these movement disorders.

Clinicians decide the amount of treatment, be it oral medication or DBS, based on how severe symptoms are through physical assessments. This usually involves feeling how much resistance a patient gives during passive motion for rigidity and visual observations. The Unified Parkinson's Disease Rating Scale (UPDRS) is a universally recognised scale to score how severe PD symptoms are. There are potential drawbacks with this though. Firstly there is an issue with inter-rater reliability because different clinicians can give different scores for the same symptom severity. Secondly, the UPDRS is low resolution, meaning that there are only five stages to rate a symptom. Finally, it is very difficult to measure and quatify accurately, the amount of improvement between new treatment regimes.

A sensor system is proposed to quantify all symptomatic aspects of the limb during physical examinations. The system uses inertial measurement units, mechanomyographic sensors and a force sensor to quantify symptom severity. An initial system has been tested on healthy subjects who mimicked the symptoms of PD: http://link.springer.com/chapter/10.1007/978-3-319-40379-3_2 delivery promising results. A video of sample testing using the initial system is shown below. A more improved sensor system is currently being developed and tested on PD subjects. 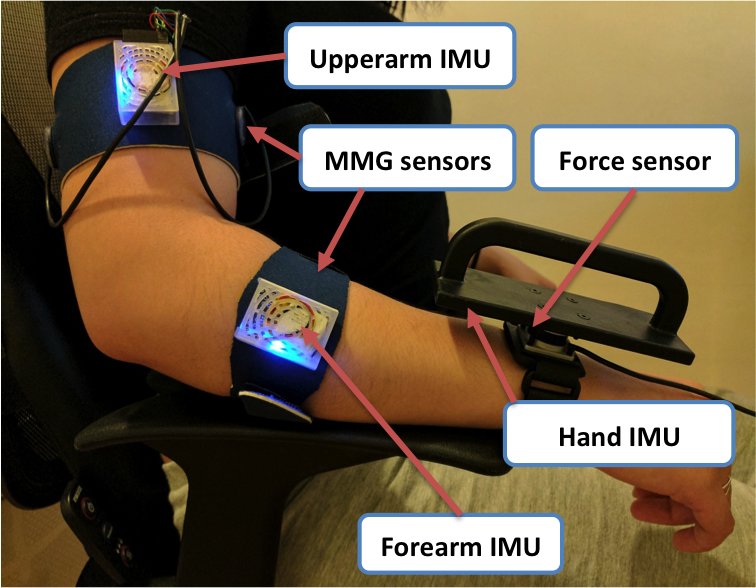 Depiction of the measurment system for quantative Parkinson's symptom assessment